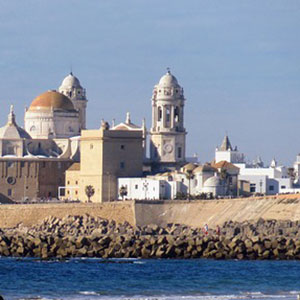 If you’ve dreamed of experiencing the colors, cuisine, and culture of Spain and Portugal, this is the time! Skip the crowds and higher prices of the busy travel season, and escape with Globus during the off-season with an escorted vacation, including Madrid, Andalusia, and Lisbon. Begin in Spain with a 2-night stay in Madrid-an iconic and modern city. Explore fascinating sights with a Local Guide, including a visit to the Prado Museum-home to eight centuries of masterpieces by Goya, El Greco, Rubens, and many more in its palatial galleries. Drive through La Mancha landscape before arriving in Andalusia and the city of Cordoba for an overnight stay and sightseeing, including the amazing of the Mosque of the Caliphs, the Roman Bridge, and the ruins of Alcazar. In Jerez taste sherry and tapas in a typical bodega, walk in the city of 100 watchtowers in Cádiz, and visit magnificent Genovés Park. A real treat is a stop at Arcos de la Frontera one of Andalusia’s more spectacular white villages. Seville is quintessentially Andalusia. Explore its streets with a Local Guide to see the ancient sights and natural beauty along the Guadalquivir River. Explore Moorish and Roman architecture of the Casa De Pilatos palace and the charming lanes of the Santa Cruz Quarter. Travel to Portugal’s coastal capital of Lisbon, and see the city’s historic sites with a Local Guide, including the quaint cobblestone alleys of the Alfama quarter where Fado singers still fill the air with song. Drive along the grand Avenida da Liberdade up to Pombal Square, and stop for pictures of Belem Tower and the Monument to the Discoveries. Every view and experience is a lot better with a lot less crowds during the off-season from Madrid to Lisbon!

Portugal’s southernmost province, The Algarve is a true sunseeker’s paradise, offering year-round sunshine and over 150 miles of superb sandy beaches. Traces of 500 years of Moorish occupation are to be found in the squat whitewashed houses, intricately decorated chimney pots, and brightly colored fishing boats.

Portugal is for explorers. Its valiant seamen first charted the Azores, discovered Japan, and unlocked the major sea routes the world over. Now you can share the anticipation they must have felt as you explore this exciting city.

You’ll discover an 8th-century Moorish castle, quaint cafes and a palm-studded coastline. The Alfama district is a maze of narrow, twisting streets, whitewashed houses, flowered balconies, archways, terraces and courtyards that charm your socks off. (And if you can find your way out of this dizzying array, 20th-century Lisbon is just as intoxicating.)

Of course, if you’d rather play by the sea, the Portuguese Riviera lies just outside town, offering something for everyone, from sun, sand and surf to thrilling casinos. Lisbon is a vast garden abounding with flowers and tropical plants. The city’s appeal lies in the magnificent vistas from its many belvederes and in the tree-lined avenues and squares decorated with mosaic pavements.

This historical city, located in Andalusia, is one of the world’s most beautiful cities and contains many landmarks, including the Moorish Alcazar and the Gothic Cathedral. Seville was also the site of the 1992 world’s fair.

Prices are per person, land or cruise only, based on double occupancy. Offer subject to availability and change without notice. Some restrictions may apply. Please ask us for details.

Charges not included in the land vacation price: airfare to and from the start of your vacation; airline baggage fees including checked and/or excess baggage fees; Federal inspection fees for the Federal U.S. Customs and Immigrations; agricultural tax; other per person taxes imposed by government entities; applicable cruise taxes, fees, fares and port charges; passports; visas and vaccinations; transfers; tips to your Tour or Cruise Director, Local Host, driver, Local Guides, and/or ships’ crew; gratuities on ferries, trains, and cruise ships; laundry; telephone; minibar; alcohol, beverages, and food outside of the contracted menu as presented at a hotel or restaurant (these extra items will be billed to you before leaving the hotel, ship, or restaurant); additional excursions and activities not listed as ‘included’ in the itinerary; porterage at airports or train stations; Travel Protection premiums; and all other items of a personal nature.

Click on the buttons below to request a quote on this deal or contact us directly with further questions or comments.

Request A Quote Send To A Friend Have A Question? Contact Us

Send To A Friend